A while ago, i wrote an article called "Never update anything" that brought to light some of the issues with our current approaches to versioning software and the shortcomings of semantic versioning in particular. However, while i did offer some suggestions for creating more stable software at a slower pace, it feels to me that it'd require its own versioning system.

This article is an attempt at describing one such system, which i will probably end up using it for my own SaaS business in the coming years and i urge others to have at least a brief look at some of the ideas presented in this article.

Why we need a new versioning system

The pace at which we move along is too fast, with new features in our software being released every month, if not every week. At the same time, however, the majority of the software costs still lie in the maintenance process (PDF link). We do expect to write our software once and to have it work for as long as necessary in lieu of bug fixes or us needing to add new features ourselves, as opposed to this metaphorical rug of stability being pulled out from under our feet by a seemingly innocent update at some point in time. In this context, added features and changes to the state of our libraries, dependencies or software packages all imply it being more akin to a spreading infection, rather than useful additions to our toolbox.

At the same time, as stated in that other article of mine, we can't not update our software either - due to some very unfortunate realities of our world, we'll still need very particular otherwise non-breaking bug fixes or at the very least to get regular security updates as necessary. And yet, you try convincing anyone, for example, the developers of MySQL or MariaDB, to have branches of their codebases and versions that do nothing apart from fixing bugs in perpetuity - in most cases, new features (and thus risks) will still be snuck in, because branching the whole codebase and then backporting fixes will only lead to utter chaos due to simple mathematics. If you have 5 feature releases per year and you want to support each release for 5 years, then after 5 years you'll need 25 separate versions of your codebase. No one can deal with that level of branching.

Many of the larger corporations out there just sidestep this issue entirely, by just dropping software for releases that are older than X years. This, coupled with minor releases being the only way to get updates which shouldn't break compatibility, but in practices sometimes do anyways, leads to us never being able to rely upon our dependencies, without having extensive test suites in place and us not being ready to keep up with the release notes and these release cycles. And, as my experience shows, this only ever leads to working with deprecated and insecure packages, even in governmental systems. That's unacceptable, we need to do better, or at least move in the direction of doing better.

What's wrong with our current approaches

Furthermore, the major versions and the feature versions don't actually mean anything. For example, if we take a piece of software with the version of 5.7.36 and another version of 8.0.27, what does that actually tell us? Do we have any idea of what's in these versions or even what we're currently looking at? It doesn't and i'd posit that that's also a problem. Once you have a project that has a pom.xml with about 100 to 200 external libraries as dependencies, you'll understand my suffering - to figure out what needs updating and how old each of those packages are, you can't just look at the version numbers which in this case are just nonsensical strings of text, but have to open the release history for each of them (or find out a way to automate it, which can be either painful or impossible, depending on how much time/knowledge you have).

Luckily, some of the software packages out there have actually been surprisingly sane in this regard and format their versions in a way that immediately gives you a better idea of what you're looking at. For example, let's look at my install of IntelliJ IDEA, a lovely Java IDE by JetBrains:

While the latter versions are similarly meaningless to the example above, the inclusion of the release year gives you immediate feedback about how old the particular piece of software is. Seeing 2015. there would without a doubt make you more concerned than seeing 2020. would and rightfully so! That's a simple, yet a very clear example of why having the versioning system encode information like that would be useful. But let's look at some more software, for example, releases of Ubuntu:

Not only do we have the release year given, but we also see that we're dealing with a long term support (LTS) version, which should be more stable than the latest ones by definition! While the latter numbers within the version still are pretty useless to an outsider, because frankly you can't encode everything that has changed into a short string without having a full changelog somewhere, knowing which "edition" of the software we're dealing with is still nice!

Similarly, the Unity game engine also adopts an approach that's very much like what Ubuntu does:

In my eyes, that sort of versioning is very close to what should be used in any and all pieces of software, at least until something better comes along. Yet, it seems like these approaches haven't really seen more widespread success, or at least no one tries talking about them that much. So, let's shamelessly steal some of these good practices that have vaguely shown up over the years in many of the projects out there, and let's give them a formalized name and a list of instructions to describe them.

In the spirit of the SemVer site, let's give some formal guidelines:

Each release must use the following format: YEAR-TYPE-NUMBER
Where:
YEAR - is the current year, for example, 2021
TYPE - is the release type, depending on project specifics; suggested values are "stable" (the equivalent of LTS) and "latest" (for development releases and rolling releases)
NUMBER - is an unsigned integer, starting at 0 and is incremented with each next release for that particular YEAR & TYPE combination

Because of the format above, you may have "large" releases which bundle breaking changes of any kind at most once per year.
Everything else depends on the TYPE value. Following the recommended naming above:
stable - will only contain non-breaking backwards compatible changes: bug fixes and security updates
latest - will contain feature releases of any sort, which add new functionality to the codebase

Because of the grouping above, for each "large" (yearly) release you'll have a split of your codebase into no more than 2 branches, one which will introduce new functionality and another that will only have backported fixes.
These should be developed in parallel, also addressing the slowly diverging codebases and providing each version with fixes for their unique contents.
At the end of a year, the current "latest" release can become the next "large" (yearly) release, while also splitting off into a new "stable" release at that point in time.
Thus, updating between versions may be done in the following manner:
stable - the people using any stable release may continue to do so throughout its lifecycle (depending on the project, whether it's supported for 1 year or 5 years)
latest - the people using any latest release may continue to use the new features, until eventually either migrating over to the next "latest" release, or choosing to stick with the next "stable" release 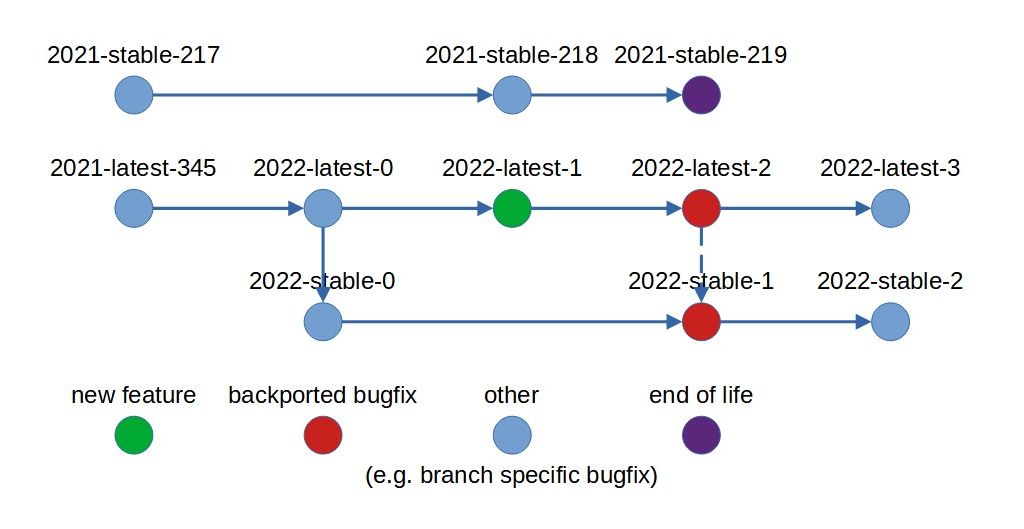 That's about it! Now, personally, i'd say that the above method is better than semantic versioning and most others due to a variety of reasons:

So, once you put all of it together, you get a very simple and elegant system, a bit like the combination of the images above:

In summary, looking at the above, i think i've basically described how and why Git branches with some additional tag information should be used as a basis for versioning as opposed to semantic versioning with its abstraction that doesn't really conform to how branching works, nor is reflected well upon by the abilities of the average developer to recognize the difference between a minor version and a patch.

Actually, i don't think that that's a bad thing and would definitely lessen the cognitive load. I actually remember rather liking how SVN had numbered revisions which seemed more reasonable than Git hashes for figuring out how sequential changes happened. If Git and its branches get us most of the way there already, why not just stand on the shoulders of giants and throw in some easily automated text generation for the CI server to take care of, whilst remembering just a few very simple rules?

Someone was kind enough to link this article on Hacker News, here's an excerpt from my comment that attempts to provide a tl;dr for what my issues with semantic versioning are, in case any of you would find that to be more readable:

1.) Because in practice everyone abuses what MAJOR, MINOR and PATCH mean in semver. I've seen plenty of software packages that have actually had breaking changes between something like 3.4.1 and 3.8.4. This is probably in part due to people lacking discipline or just ways to properly test that nothing will break, but also is our objective reality, so it would be nice to fix it somehow.

2.) Because 3.4.1 and 3.8.4 don't actually mean much to anyone. Ubuntu, Unity, JetBrains products and some other pieces of software have far more meaningful and easy to parse version numbering schemes, so seeing "2004" in the version number would be rightfully alarming, but 3.4.1 would be easily overlooked. I'd argue that when software was released actually matters, at least with the way the industry is currently progressing (e.g. an older release may only support TLS v1.1). Add the latest/stable distinction and suddenly it'd become a bit more easy to reason about whether a version is supposed to be a "bleeding edge" one, or something more boring, yet stable.

3.) With our current versioning, it's not always clear how to get from 3.4.1 to 3.8.4 and whether that's what we even want. Having the versioning somehow address the fact that LTS versions eventually diverge from the new versions, or even allow us to go from the "latest" version to a "stable" one down the road (if we need features before they're considered stable) would make things a bit easier. For example, have a look at this mess: https://docs.gitlab.com/ee/update/#upgrade-paths

4.) Furthermore, the very existence of having "stable" versions vs just having "latest" (rolling release) versions would be telling and would allow you to set your expectations in regards to managing new releases and breaking changes accordingly (this is already useful when looking at Docker images in Docker Hub). At the same time, seeing new releases in 2021 for the version 2004-stable-... would also reflect positively upon choosing that package or piece of software for slower enterprise projects, similarly to how MySQL 5.7 still receives updates: https://www.mysql.com/support/supportedplatforms/database.html