Using an SD card for storage in GNU/Linux is broken: Part 2

So, previously i wrote about how SD cards in GNU/Linux are pretty broken. However, i thought that perhaps i just got unlucky with either the particular model of SD card, or perhaps the ext4 file system.

Some time later, i got a 16 GB microSD card and formatted it in FAT32, which in theory should decrease the load on the storage medium, given that FAT32 is not a journalling file system. Then again, this post exists, because the problem appears to be caused by the OS itself, rather than the tiny memory stick.

Initially, it seemed to be working fine. One of the more annoying aspects of using it for storage (in my case, my Nextcloud instance files are mirrored to it) was that i had to manually click on it in the file explorer from the available devices so that it would mount. That seemed simple enough to change, i just had to open the Disks application and within it change how it is handled: 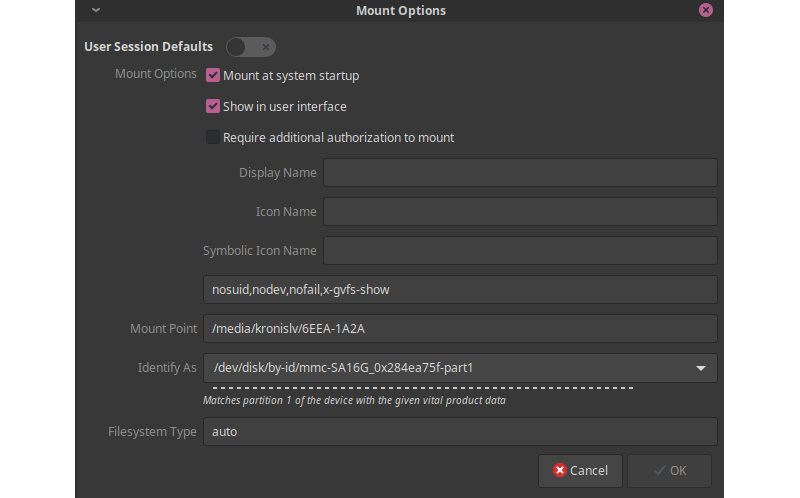 Unfortunately, after a restart, even though it appeared to be working, all of the file names that contained Unicode symbols were broken. This, of course, seemed pretty horrible, considering that noone would enjoy the idea of having thousands of files be corrupted in such a manner, especially since they'd get synchronized to the cloud and batch restoring the older revisions would mean having to restore the entire Nextcloud instance from backup, which would be a pain:

Thankfully, it also appeared that the Nextcloud instance had crashed, so nothing was synchronized at all! Trying to start up the Nextcloud client manually lead to it simply not happening with absolutely no error messages or other output for the user. I could only see what the matter was after running it through the CLI manually:

That was not awfully encouraging, seeing as it lead me to believe that the file itself was corrupted. Someone had made a GitHub issue after running into the same error, though in their case it turned out to have something to do with the Owncloud client instead of the Nextcloud one:

My solution to the problem turned out to be simply restoring the default configuration for the disk and letting the system handle it:

This also means that i literally cannot automatically mount an SD card if i want to use it for storage. It's a bit sad, considering that it is 2020 and GNU/Linux (in this case, Linux Mint) does not have support for something so rudimentary as a GUI option. Seeing how easy it is to mess up /etc/fstab, i'd very much prefer not to mess with it manually, same as how even changing the swap file size has its own dedicated CLI commands to abstract doing that away from the user.